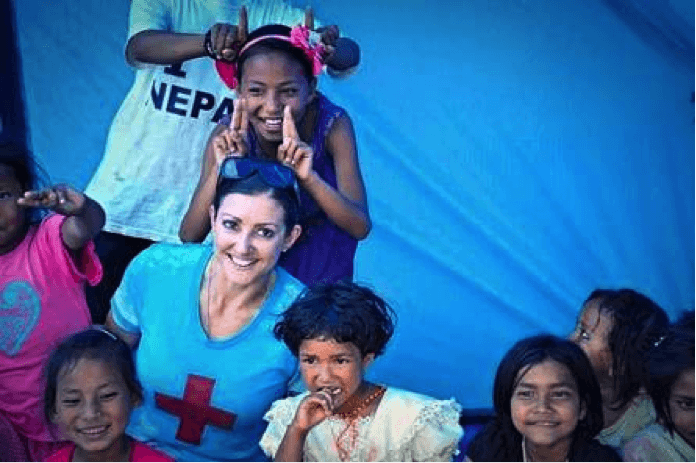 Dr. Emily Farkas, a thoracic surgeon at Halifax Health, has experienced earthquakes in California and has traveled to many developing countries to provide medical treatment. None of that prepared her for a 7.3-magnitude earthquake in Kathmandu and the scale of suffering she witnessed in Nepal.

Farkas arrived in the Himalayan nation on May 3, barely a week after a 7.8-magnitude earthquake had devastated what already is one of the poorest countries in the world on April 25.

In Kathmandu, she found many people preferring to stay outside rather than risk getting trapped indoors again in another earthquake.

“People put up tents next to their homes. In the median strips of the main roads, which are maybe two feet wide, there were tents lined up. People were so afraid to be indoors after the first earthquake,” she said.

Farkas was on the third floor of the city’s teaching hospital when a second earthquake hit on May 12.

While Farkas described much of the damage to the Kathmandu University Hospital at Dhulikhel as moderate, patients wanted to get outside. Farkas helped to evacuate the building.

“It was a little harrowing,” she recalled.

“We moved the entire hospital, except ventilated patients and the (operating room), outdoors again under makeshift tents and tarpaulins, and slept outside as well in our own tents and bivouacs. It was best described as a war zone without enemies,” Farkas said.

The earthquakes made everyone jittery and anxious.

“Even with the aftershocks, you would hear this wave of gasping and fear, ” Farkas said.

Farkas, a volunteer with CardioStart International, had intended to perform cardiac surgery on the long-planned May 3-16 mission trip, but this plan was scrapped after the earthquakes, which have killed more than 8,500 people.

“Cardiothoracic surgery was the furthest thing from my mind, that wasn’t what they needed,” she said. “We did whatever we could to help.”

Farkas and the CardioStart team performed orthopedic surgery and treated general trauma, such as cuts and burns.

They relieved the exhausted medical staff. The earthquakes made many of the Nepalese hospital staff homeless, but they preferred to keep treating the wounded rather than rebuild their homes, Farkas said.

Farkas brought supplies provided by the vendors of Halifax Health. Florida Hospital also donated $1,000 to the relief effort in Nepal.

Nepal is one of the poorest countries in the world, with a per capita income of about $750, according to the World Bank. It ranks 157th out of 187 countries on the Human Development Index.

So basic supplies, such as gauze dressing, were much appreciated. The Nepalese typically have to cut cloth into bandage strips.

“They spend all this time cutting and fashioning dressings to fit the wounds,” Farkas said. “We provided these pre-made dressings that were critical. We found it to be a very simple but valuable donation.”

Farkas’ CardioStart group also bought 13 classroom-size tents to replace a school in a village that had been destroyed by the earthquake. The tents are sturdy enough to withstand monsoon weather. The schoolchildren helped with the tents.

“You saw the kids with smiles helping us to put the school up. It was just heartwarming,” Farkas said.

The resilience of the Nepalese has been inspiring, she said.

“There was such positivity in spite of losing everything. It’s almost hard to understand,” Farkas said.

Dr. Aubyn Marath, president of CardioStart International, said the trip to Nepal “was an extremely positive experience despite the tragedy that happened to them.”

Dr. Vinicius Nina, a professor of cardiothoracic surgery at the Federal University of Maranhao, Brazil, who also volunteered for the Nepal mission, remembers feeling a flood of conflicting emotions while in Nepal.

“Every day, in a split of second we felt fear, sadness, frustration, but minutes later we were granted courage, faith, hope and joy,” Nina said in an email. “Only in a tragedy zone like we saw in Nepal, someone can see and live such a flood of perceptions and sensations at the same time. Unforgettable.”

CardioStart’s mission to provide treatment for cardiovascular diseases where access to care is normally not available. Marath has traveled with Farkas to provide care in Vietnam, Peru, Uganda, Ghana and Nepal.

Nina said, “Dr. Farkas finds her passion in the little things demonstrated by those who need most. I would say: smiles of patients, joy of the children and also the enthusiasm of the health professionals.”

Dr. Jack Holt, a cardiac surgeon for Florida Hospital Memorial Medical Center, learned about the trip to Nepal in an email from the Society of Thoracic Surgeons. Holt then asked Florida Hospital to donate to the mission.

Holt noted Farkas’ “passion is going overseas and helping people,” adding, “I really admire her for that. She has taken a different path from most people.”

“She certainly could have a thriving practice anywhere she wanted to go, but she’s elected to do this,” Holt said.

Farkas plans to go Nigeria later this summer in another mission for CardioStart International.

Hopefully, she will return to Nepal by the end of the year to provide the cardiovascular medicine as originally intended. CardioStart wants to help train the Nepalese doctors in cardiac surgery as well.

Farkas thinks the willingness in Nepal to go forward with the program is “another sign of progress for them. It reflects that they will move forward despite the adversity.”